× Unsupported Browser: Some features may not work properly in Interent Explorer. Please use one of the supported browsers - Chrome, Firefox, Safari, Microsoft Edge.
When autocomplete results are available use up and down arrows to review and enter to select.> search 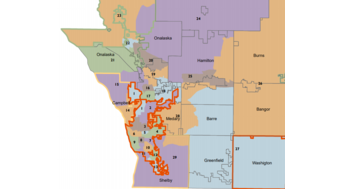 A proposed redistricting plan for the La Crosse County Board will be presented at a public hearing on Sept. 13. View the proposed new map and find more information here.

The La Crosse County Redistricting Committee has approved a redistricting plan that now moves to the full county board for consideration.

The plan would increase the number of board seats from 29 to 30. By adding a new seat outside the City of La Crosse, the plan reflects population growth in suburban parts of the county.

The proposed map can be viewed by clicking here: https://lacrossecounty.maps.arcgis.com/sharing/rest/content/items/c456af59e09a407b83329ecee94c436d/data

As a comparison, you can view the current board map at this link. Next, the tentative map will be presented at a public hearing at 5 p.m. on Sept. 13 (click here to find out how to attend), and will then go to the full county board for approval.

Four current county board incumbents would be in districts with new numbers under the proposed map, if they choose to run in the 2022 elections.

The district that would have no current incumbent under the proposed new map is District 25, which includes territory in the towns of Holland, Farmington, Burns and Hamilton.

Guiding principles for the county's redistricting process have included:

-All districts must be substantially equal in population.
-Districts must generally consist of whole wards or municipalities.
-Territory within each district must be contiguous (except for island territory) and compact.

All the maps were prepared by county GIS staff using population estimates provided by the U.S. Census Bureau, and then presented to the redistricting committee for input.

Send questions or comments about the redistricting process to [email protected].